I was in the market for a new tent and was gravitating towards a quality 4 man for other than backpack hunts. Cabela's had one of these tents on display at their grand opening in Anchorage and I was impressed.

Once this year's Talkeetna fly-in was firmed up I went to buy said tent and had to back order it--no problem, although I was nonplussed to learn that the initial order of ten tents sold out within the first two weeks yet no replacements were on order. Anyhow, I ordered the tent and was told 12-15 business days which was no problem since I was headed to the slope for a 3 week hitch. The tent arrived two days before I got home.

I did a dumb thing with regard to the tent and the hunt--I didn't set it up and inspect it before taking it to the field.

For the tent itself:

Pros
1) It's roomy and almost tall enough to stand up in
2) It's well ventilated with screen-panels along the sides and top. It has mesh storage pouches running the length of both sides.
3) It has four sewn in attachment loops inside for running clotheslines or suspending a net
4) The zippers are well laid out and smooth.
5) Set-up is nearly intuitive. To test this I set it up without reading the instructions. The tent itself is pretty straight forward but the fly is not completely symmetrical. It attaches to the tent in either direction but one vestibule is longer than the other so depending on which side you want to be the front--the end with the small window is the bigger vestibule. Total initial set up time including monkeying with the fly alignment: 25 minutes. Once we knew what we were doing? 10 minutes.
6) The suspension straps are color coded and the clips snap to the poles easily.
7) The perimeter tie-down points on the tent and fly have Fastex buckles and cinch straps.
8) The stakes are heavy duty. I brought a small camp axe specifically for pounding stakes and despite the rocky ground only bent one stake
9) Once set up it's very sturdy and has several guy lines for additional security in high winds.
10) A standard 6x8 tarp makes a perfect footprint.

Cons
1) It's heavy. At 20lbs it's at the upper limit of acceptable for a 4-man tent IMO.
2) Tent weight is driven by the poles--there's 5 total and they're fiberglass. I was a bit disappointed by that. For a $300 tent I expected aluminum poles. I haven't weighed them but they heft at an estimated 10 pounds. If I can get a deal I will replace them with aluminum.
3) We did experience some minor condensation dripping--water ran down the inside of the fly in the outer, upper corners and wicked down the suspension straps to the seam between the fabric and the screen.
4) The carry bag is made of the same material as the tent floor--it's thin and it's long term durability is in question.

We had some strong winds on our hunt as well as rain and snow and the tent handled the weather beautifully--minus the condensation.

All in all I give the tent an A- and would buy another at the same price point. 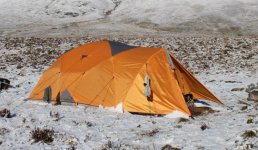 Erik in AK said:
2) Tent weight is driven by the poles--there's 5 total and they're fiberglass. I was a bit disappointed by that. For a $300 tent I expected aluminum poles. I haven't weighed them but they heft at an estimated 10 pounds. If I can get a deal I will replace them with aluminum.
Click to expand...