So I am going to be making some jigs up for pike and lakers this winter.
I need to get some made to be sent out to some friends in Bethel and some other places.
I am definetly going to send out a few in my new experimental but super realistic holographic foil coating.
But, I also need to powder paint a bunch of jigs as the foil is a bit more time consuming.
So other than what I come up with as my favorites what are some of yours?
I can do multiple colors with my powder paint airbrushes so they do not have to be solid color jigs.
These will mostly be vertical slab style jigs. In 1/8oz 1/4,3/8,1/2,5/8 ,3/4 and1oz and/or possibly 1.5oz-2oz sizes. So what sizes do you use the most of?
I am most likely going to make 100 or so jigs to send out so there will be lots to be painted in all different sizes and colors.
I mainly want some ideas so I can send a wide variety of choices.
Thanks

for lakers we typically use jigs that are 5/8 - 1 oz. colors vary from whites, glows, greens. real bright and flashy is what we typically look for when using jigging spoons.

I use 1oz to 1.5oz the big fish like to chase their dinner. i like geen and blue with some silver mixed in.

Never caught a laker but slayed many a pike through the ice last winter on silver/blue and dark green/ yellow. Orange and yellow was a distant 3rd.
B

The Kid said:
Never caught a laker but slayed many a pike through the ice last winter on silver/blue and dark green/ yellow. Orange and yellow was a distant 3rd.
Click to expand...

What kind of spoon were you using? I barely got into the pike last year and am looking to hit it hard this year as I learn more. Thanks for any info!
Any good spots I can try? road system or not, I have snow machines finally!
C

Haven't done a ton of laker fishing but did lots of arctic char fishing, best colors were chartreuse, white and orange. For pike I find they don't like a ton of action (have rarely had them hit it on the drop) and I get the best flutter out of a spoon......krocodile, wilsons' wobbler and others, good ol daredevle, little cleo's ......kinda you pick it. I don't know that a regular jigging jig would be the ticket. Mostly I just twitch it, short hops not big swoops like with lakers or char that so often hit it on the drop. Usually with pike I will feel them nudge it.......then I'd drop my rod tip six inches and WHAM!.

However, a planing jig that you could add a big grug tail to the end of would probably be good. Less vertical movement and more lateral. I put a camera down to see what was going on and it was amazing how often a pike would just mosey up to a jig or bait......stair at it......then go again. Lots of action in the winter seems to put them off, but if the meal looks easy they smack it. My .02

I fished figure eight a bit last winter. It's a fun ride and lots of action, just no big fish that I saw. I had great luck with Krocs, buoyants, and little Cleo's 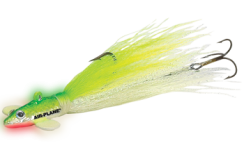 Have had good luck with lemon/lime buzz bombs in the 4" size as well for lakers.

Massive white tube jigs work great on lakers; anywhere from 6-8". For pike, the smaller, 4-5" white tube jigs work well. Mr. twister yellow is also very effective; it seems like water color determines which works better. The biggest issue is getting away from the flimsy wire hooks and going with a more solid hook that can handle fish over 20#. Tube jigs are great because they are constantly in motion; the tiniest twitch of the rod sets them off.
You must log in or register to reply here.
Share:
Facebook Twitter Reddit Pinterest Tumblr WhatsApp Email Share Link
Top