So I hunt the Tustamena Lake area two consecutive weekends without killing a bear. We did see black bear on both trips and a brown bear on one of the trips. The brown bear was big but elusive. We also seen plenty of tracks ... this was all before the fire started on Funny river road. One night during the middle of the week, I'm hunting locally and spot two brown bears 'wrestling' in a large swampy area. The one bear was dark brown and the other bear had more of a blond color. After glassing the bears for a few minutes, I decide to go after them. So I grab my 375 Ruger and make my way to the bottom of the hill where a smaller swamp begins (and eventually intersects the bigger swamp holding the bears). When I get to the bottom, I'm out of breath from moving so quick and I'm soak and wet from splashing through the wetlands. I make my way to the larger swamp and look left expecting to see the bears 400 yards away. No bears. I look over that area closer for the next 5 minutes when I hear a sound coming from my right. I turn and seen one of the bears heading my way. Evidently, they had covered the 400 yards distance while I was climbing down the hill toward them. I have very little cover so I rush to a stand of small spruce. The lighter colored bear is focused on me at this point. The bear stops about 50 yards away and is confirming what she already knows with her nose. I've already got my cross-hairs lined up but I don't know where the second bear is located. The lighter colored bear turns and begins heading back down the swamp toward the original location they started. I squeeze the trigger and the bear flips over on the ground. The brush explodes and the second bear comes running up to the bear I just shot. That bear begins jumping around the dead bear, almost pouncing like a cat. Suddenly the bear stops and looks in my direction. The bear studies my hiding spot closely and begins moving forward. Then the bear stands up on it's back legs and attempts to look over the top of the spruce in front of me. When the bear is convinced I'm present, he drops to all fours and scrambles out of sight. This all happened so fast that it felt like a dream. It took me nearly 5 hours to skin the bear and get the hide out of the woods. I was back home by 1:00 AM. I surely felt blessed to kill such a beautiful bear before the close of the season. Unfortunately, the bear was a sow. She squared 8-1/2 foot and had a 23-11/16th skull. When I sealed the bear at F&G, I asked him about the bears age. The bear's teeth were worn and cracked. The bear had scarring including a torn ear that had healed but looked twice as long as the other ear. The biologist guessed her to be 16 years old. Her hide was in great condition and I plan on making a rug when it comes back from the tannery. Thought I'd share my success to encourage others. I'm convinced that 'timing is everything'. Good huntin' to my forum friends. 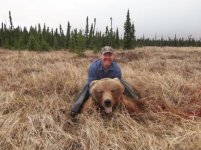 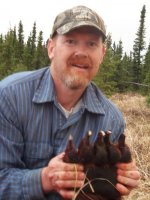 Great write up and awesome hunt:topjob:

Good job. Thanks for the hunting story and thanks for taking another calf eater out of business. Happy Fathers Day!
B

Great looking bear, thanks for sharing. What bullet were you using?
T

bcsteve said:
Great looking bear, thanks for sharing. What bullet were you using?
Click to expand...