So I place a bear bait station on the KWR for the first time. My son (who is 9 years old) really wants to shoot a black bear. I figure this is the easiest way to do it. I spend hours putting up a 'two-man' tree stand which is a 2-1/2 mile walk from where you park the truck. We bait the barrel shortly after Easter and it takes 3 weeks before the bait is hit. When it is finally hit, there are two different black bears and a brown bear hitting the bait. Finally, I take my son to the spot and we sit up in the tree stand. After 10 minutes, my son is already asking 'where's the bear' ... 30 minutes into our hunt, he's asking 'why are they not coming' - We leave the site that night with no bear sightings. I continue to check the bait every other night. Without an apparent reason, the bears quit hitting the bait for the next 10 days. I mean it just goes cold ... no activity. The marshmallows I put on the ground are still on the ground 10 days later. Even the brown bear lost interest. So last Friday, I come home from work and eat dinner. During the meal, I ask my son if he'd like to go with me to check the bait. I tell him it's like fishing ... maybe something will hit the bait tonight. He doesn't want to go. I pressure him but my wife finally jumps in and tells me he doesn't feel that well and he's getting a cold. So after dinner, I grab my 375 Ruger and a bag of popcorn (just in case). It takes me an hour and a half to get to the bait site once I start my truck. So when I get there, I notice the bait is hit; but the game-cam I have set up on the tree was not functioning and I have no pictures or times. Since I'm there, I decide to sit in the stand for a couple of hours and re-bait the barrel. I climb up in the stand and the wind is blowing pretty good (as there is rain on the way). After an hour, I look at my watch and it says 10:00 PM. I thought I'd hunt till 11:00 and head home since it's been a long week and I'm getting tired. I finally rest my head on the shooting rail and begin to teeter on the edge of drowsiness. That's when I hear a loud racket in front of me. I look up and there is a large black bear pulling the sticks out of the barrel. I slowly grab my rifle and position it on the shooting rail. I look through the scope and determine this is a large black bear. About that time, the bear looks up at the camera and sniffs the air. He looks back at the barrel and begins to exit the area. I'm startled because the bear was leaving the fresh bait and abandoning it's endeavor. Unfortunately, the bear is walking straight away and it doesn't present a good shot. But suddenly, the bear quarters left and I manage to squeeze the trigger. The bear lunges forward and everything goes quiet. I wait two minutes before climbing down and chambering another round. I walk up to the barrel and the bear is lying 10 feet away on it's back with all four legs up in the air. Wow, big bear for sure. Now I have to get it out of the woods before it gets dark. Instead of skinning the bear and getting the smell of blood everywhere, I decide to drag the bear away from the bait site. I had to get creative and use the bottom rungs of the tree stand to make a drag. I was able to drag the bear some distance before it got dark. The bear was over 6-1/2 foot tall and very healthy. My son was upset at first because he felt I shot his bear. But then he realized he had a chance to go with me but chose to stay behind. Once again, timing is everything. 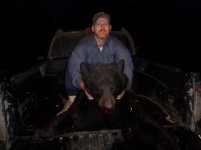 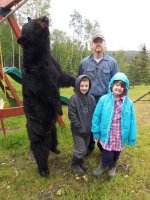 Way to go! Looks like a nice bear. You got him out in whole. Did you drag him 2.5 miles?
T

Thanks. I had to recruit some help. Too much bear and too much distance to go the distance by myself. (I did drag him the first 1/2 mile).
G

get a plastic ice fishing or snowmachine sled, I use one and have drug out several large whole gutted bears with mine, they go over stumps and roots very easily. Has made a world of difference from the days of having to skin and quarter at the tree stand.
R

Nice bear, hopefully your son learned a lesson in hunting

What is KWR? Sure hope its not what I think it is

akrstabout said:
What is KWR? Sure hope its not what I think it is
Click to expand...

"...black bear baiting is allowed on the northern half of the Refuge, specifically that area west of the Swanson River Road to the Refuge boundary, and north of Swan Lake Road to the section line approximately 6 miles north, by State and Refuge permit only." http://www.fws.gov/refuge/Kenai/community/2014_article/04112014.html