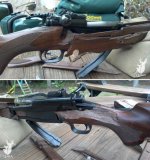 First time I've seen that one, but yeah it takes a lot of pressure to squirt a 308 bullet down a 257 hole.
M

Candidate for Darwin award ? I would like to know if the bullet did exit the barrel.

Another reason that I avoid public shooting ranges.....the lack of basic knowledge demonstrated by some folks is shocking.....have been muzzle flashed one too many times, plus fundamental acts like clearing the weapon, pointing the muzzle down range, open the action, etc.

There is no excuse for these acts.
H

It is also one of the reasons I like Remington 700 series rifles, as I have seen D.A.D.S. do similar things and the Rem 700 rifles didn't disintegrate into shrapnel!!!
Mtbikeguy, in the instances that I have seen, the bullet miraculously got out of the barrel but the Bolt, Receiver and Barrel were all no longer safe for use, as they had been stressed beyond their safe working limits!

Another strong vote for a Top 10 Darwin!
S

Smitty of the North

Do not own a 308 if you also own a nother rifle chambered for a cartridge of smaller caliber, that is based on the 30-06 case.

To simplify, just don't own a 308. They're Dangerous. They fit into too many wrong chambers.

Smitty of the North
M

Man even when these guns blow to hel, it's amazing how intact they are.

1. To qualify for a Darwin Award, I believe the person must perish from said stupid act and thus no longer be able to pass on their faulty genes. Looking at the photos, I am just guessing that this person did indeed survive and would only qualify for an Honorable Mention and a "Better luck next time".

2. Is that a children's swing set/play place thingie in the background of the bottom picture?
R

buddy of mine did this back in 98! He was shooting his 308... put it down and picked up his 2506 ackley improved. He was down behind the rifle and reaching (blindly) for shells as he fired. (turns out he left his 308 rds on the table w/ his 2506) All of the sudden POW! Fractured the stock, swelled (and jammed) the receiver and (we found out later) pushed 100% of that 308 rd thru that .257 orafice and downrange! He came away w/ mild powder/ gas burns to his face, hands w/ numb for a bit.

turns out a 308 cartridge fits into a 2506 chamber pretty nicely as the nose of the short 308 bullet rests up against that portion of the chamber where the longer 2506 necks down in dia. And to complicate thing further a 2506 ackley uses fire formed 308 brass! So you can't tell what you have in you hand by looking at the base of the cartridge. (they both say 308!)

We decided it would probably be a good idea to only have ONE rifle and ONE cal. of ammo on the firing table at a time!

BTW he salvaged the barrel! screwed it into a new receiver, put a new stock on it, and it's still out there somewhere!
R

BTW: No this isn't his rifle in the photo. (I think it was a Remington)
N

I don't think that'll buff out.

Looks like Lupy bases - I wonder how the scope turned out???

That is a testament to the design, basically 106 years old, that most/all damage was forward of the shooter's face/head. I bet his arm took a beating though. Hey, ***** happens.

is that gun for sale now on gunbroker?

mainer_in_ak said:
is that gun for sale now on gunbroker?
Click to expand...

That's a good point, I need a safety selector for a post 64 model 70, anybody know this person? I'd like to see if they'll sell me the bolt or switch
H

mainer_in_ak said:
is that gun for sale now on gunbroker?
Click to expand...

I believe it is the Win M70 Featherweight, Limited Edition "Jenny Craig" model!

These QDMA guys sure seem to know alot about blowing up rifles.
7

Best blowup I've witnessed personally was in the mid 80s at the San Clemente trap club.

Some dude apparently put 36 grains of Red Dot (double charge) into a reload and pulled the trigger.

He WAS shooting a BT 99.The chamber was torn open like putting a 454 Casull through a Coke Can and peeled back 6 inches.The rib ended up about 10 feet away.Forend was splintered.The breech was driven 2 inches back into the tang and the buttstock looked like you had hit it 5 times with a 20 pound sledge.

Only thing salvageable was the recoil pad.