My moose hunt 2014 started with my bro purchasing a boat this summer. I've got ATVs and have hunted successfully nearly every year on them. We wanted to try something different this year hense the boat purchase. Mind you it's not a big boat being just 18' long with a 70 hp Johnson with a jet. We tinkered around this summer tweaking things and getting repared for this falls hunting season. We made a couple of longer trips of 200+ miles in it fully loaded with gear and fuel to see what it would handle. Knowing our limits we set out looking for moose. We chose to start the adventure later in the season in hopes of cooler temps and less leaves to deal with.

The appointed day arrived and we set out. Part way up the road 60 miles my bro gets all quiet and said that he had left a very important bag at home. It had bullets, the camp stove, his knives, eating utinsels, and fuel. Needless to say I talked him into continuing on as I didn't think we had another 3 hours to turn around and get his forgotten items. After all I had a backup cook stove I wanted to test out, I had extra utinsels, and we now shoot the same caliber gun so I also had the bullet issue covered, and I had a knife. We continues on.

Arriving at at our predetermined launch point we loaded the boat and took off. The trip upriver to the hunting grounds proved to be beautiful and uneventful. The way I like my boat trips to be. We did some calling and scouting the first night and had high hopes as the sand bar we camped on that night had the tracks of a very big moose in the mud.

Waking up early on day 2 we were created by fog, lots of it. We couldn't see but about 100 yards. Not being able to hunt on that side of the river die to it being closed by then we slowly motored to the other side of the river. After beaching the boat we began looking for sign of moose. Finding some but not fresh we wandered around a bit sounding as moosey as possible calling and raking the brush as we went. After a little of this we could hear voices upwind from us so we backed out and moved on. The wind really carried voices because those guys were at least 3/4 mile upriver form us. The next spot was more of the same old sign but nothing fresh. Looked like we were 3 weeks late. No worries though we had 6 days to get this river hunting figured out. We decided to move camp upriver that day to get it out of the fog as it seemed to hang out in that area longer than anywhere else.

The next couple of days blended together. Motor up river and float down slowly glossing and calling as we went and stopping at moosey looking areas. We would get out and go look at ponds the gps showed in hopes of finding something there. Nothing. We did find one pond that had fresh tracks around it so we sat there till noon one day and from 5 till dark on two nights. Calling and just sitting. Nothing! At this point I told my bro we needed to bag this idea and go get the 4 wheelers and go someplace I know how to hunt. He wasn't excited about that idea so we stayed. One evening day 3 I think it was we scored a goose and had that for dinner. My bro reminded me one day that hunting is like that but your luck can change in two minutes so we needed to stay on it and be ready when luck caught up to us.

The last night out there of 5 we crawled into bed dejected. Not a single 4 legged animal bigger than a squirrel was seen or heard. Lame! We had no real plans for the last day except to break camp and head home. We slept in some that morning and when we woke up we were greeted by sunshine. We began tearing the camp down and loading it into the boat. My mind was thinking of being home and the hot shower and real food that awaited us when we got there. I happened to look upriver and those thoughts all came to an abrupt halt.

There just above camp swimming the river was a moose! I quickly confirmed that it was a bull even! Off we sprinted right at him. Trying to cut the distance we'd be shooting when he hit the shoreline. We waited at a log jam for him to clear the water before we shot him. Walking up to him after it had all come together so fast was surreal. He looked huge. Then reality started to sink in. The weather was turning to rain and we had a lot of work ahead of us and a long haul home. Six hours and some bird scares later we had everything in the boat. Now to see if it would get on step. It did! 2 1/2 hours later we were at the truck and 5 hours later that long awaited shower and real food became a reality.

Good trip, great company everything worked as designed. No mishaps and a nice bull and memories to last a lifetime were made. Glad we did it but not sure we'd do it again. Just not my kind of hunting. 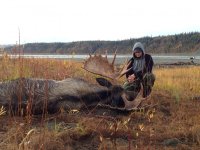 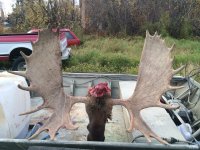 How wide do you think?

Excellent! Sounds a lot like my sheep hunt - seemed like the hunt was over and then the unexpected occurred. Nicely done, and thanks for sharing!
D

With those wide points on one side I'd give give him 56 or 57. Nice moose for sure, and it's cool you appreciate a smooth uneventful trip....sure beats the "there I was" stories.

Ya know, I read all these reports of guys seeing lots of cows and sublegal bulls.......and often no shooters. Well, I've shot a fair amount of moose in up here and I've nearly shot more than I've seen during season, and have only seen ONE cow during season. Me and the boys always say "see a moose, shoot a moose" but I hear ya, the lack of action in between can make you think you've lost your mind if you are used to lots of animals to see......then Bam! it's go time. Your trip sounds much more like my experiences moose hunting. I love it once they are calling cuz you never know when the big sucker is going to come lolling out on the meadow or down the bank.

Congrats on the bull! Crazy how it works out once you've come to terms about not getting one and then BAM, it happens at the last moment. It really is icing on the cake!

Standing 10 feet from the willows with all of the bear tracks around and one of those spruce grouse thunders out or a raven swooshes past yep they scare me!
C

sambuck12 said:
Standing 10 feet from the willows with all of the bear tracks around and one of those spruce grouse thunders out or a raven swooshes past yep they scare me!
Click to expand...

Grouse are brutal when you are keyed up on bears. I was doing a walk through with a buddy moose hunting a few years ago.....we were just being moose scraping brush, wacking trees and covering ground. We came upon a bear cache from someone's successful moose hunt....ten yards of ripped ground, fresh blood......um.....can you say backtrack and cover your butt? Well about 50 yards later I felt I was probably out of the mauling zone so we tried to get back to hunting. I wacked a tree with my calling antlers and this grouse explodes out of the understory about 5 feet away. Now, I've not shat myself since college but this would have been a very near incident

Beautiful moose- congrats! 63" is my guess.