I know we havnt received much snow but how much do they have there. Looking on taking machines in this weekend. I know about driving out there and it has to be frozen an or something like 3" of snow. Just curious on the conditions. I'm thinking it's still too early for anything other than a road hunt.

I'm hoping the ground is frozen enough. We plan to head out this weekend to check things out. From how it looks in Fairbanks, I don't think snowmachines will fly, and from what I'm hearing, it is way too wet for 4 wheelers this year. Might be limited to tracked AATV's for a while.

Not much snow in town according to the webcam. 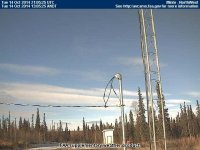 Ya i was thinking about snowmachines too. I figured it wasnt ready yet and i dont intend on taking wheelers cuz it would restrict you to not very much land. Curious to what you see this weekend Jerod. I dont think i will be going out and if i do it wil just be a drive in thr truck.

As mit said, not enough yet. We got on the Dunbar Trail and worked our way south since the Chatanika is flowing with ice in it. There's no crossing it for a while. We came across a group with snowmachines and they were towing one out. Two of them broke through the ice and one was dead. We broke through ice a few times on the trail. Once I broke through on one side but not the other. I was tipped over pretty well and had to winch out. The ground was frozen solid off the trail, so we headed into the flats a little ways and set up the wall tent. We hiked around a bunch, and found some tracks but not much. We didn't see a moose all weekend. We talked to others that had the same lack of luck. Had a great weekend with good company though. Hopefully a couple of us will head back out next weekend to check on things again.

Last year I recall that they had a 3" minimum snow requirement before motorized travel was allowed in the refuge. It was printed right on the tag. Is that not the case anymore?

Yellowknife said:
Last year I recall that they had a 3" minimum snow requirement before motorized travel was allowed in the refuge. It was printed right on the tag. Is that not the case anymore?

We called and made sure F&G approved access, they gave us the go ahead.

A new permit was written for the area in July of 2014. It reads that the motorized travel "off trail" is allowed on October 15th pending either adequate snow cover or that the ground is frozen. I talked to the area bio on Thursday before we headed out and he gave us the go ahead saying that the ground is plenty frozen, especially for rigs like Argo's on tracks. I told him we would pay close attention when we travel off the trail, and I plan to call him tomorrow with a review on what we saw. We could make out our tracks in the snow, but on bare ground we could only tell where we had been by a bent over tree. The ground is frozen hard, but the overflow, creeks and lakes are marginal at best, and dangerous for the rigs that don't float.

We were also buzzed overhead by the trooper cub. He could have landed out in the open where we were, but he kept on flying.

I just flew over the flats around the lakes and saw tracks from the Dunbar to the southern side of the lakes. NO There is NOT enough snow yet!

Good to know. Thanks guys.

For the record, the first moose didn't start coming out of there until mid-Nov last year, and there are open spots on the sloughs clear into Dec. Going in October is strictly a game for those with prior experience on judging ice conditions and a fairly high risk tolerance.

Just an update: I just got back from a 2 day minto hunt (or sight seeing trip). I drove back and forth over and over. Shot a ptarmigan, saw TONS of rabbit tracks, but saw ZERO tracks/poop/ or moose. Roads were not too bad but the clouds and snow came in, higher in the hills I stood in about a foot of snow while lower areas only had a few inches.
You must log in or register to reply here.
Share:
Facebook Twitter Reddit Pinterest Tumblr WhatsApp Email Share Link
Top