Looking for ideas for a snowmachine sled capable of hauling 15' logs. Any pics?

www.logsled.com looks kind of like a good idea for the front.
N

Location
Wasilla, behind 3 Bears on the Palmer Wasilla Hwy

I second the freight sleds that Ron builds.... the load you can haul on those towing with a Bravo is incredible! I use smaller sleds to dral the logs out of the woods and pile them up on the river, then use the freight sled to haul them to the lodge.

bmunsell said:
Sled type depends on whether you're wanting to go off in the boonies and go logging or wanting to haul logs down the trail to your cabin. For hauling down the trail the 4 ski freight sleds are really hard to beat.
Click to expand...

Good advice there. My latest sled I made with 9 inch wide runners, 14 feet long with 9 feet on the ground, out of 2x8's. Once in the trees those four posters would be likely to get hung up. They are likely to not be cheap, and look heavy. Remember you have to lift the logs up onto the sled too. That can just about kill you.

I am not yet sold on the plastic sheet sleds. For the price of one tricked out plastic sheet sled, I can build four of mine. The design itself is self limiting. Once loaded, you don't have so much weight on it you cannot pull it. Again, the difference will be where you are going to use it. On nice groomed, hard trails and rivers, you can make the sled wide, long and with wide runners. But once in the trees....
Here are a couple shots of in the trees:

This is what I was after:

Here is a pic of my latest sled when I took it out for a trial run. I had just returned from the Yukon area. You can just see the logs I had already rolled off on the far side of the sled. I had to cut them into much smaller pieces to get them into the truck. This run took me 75 miles up, about 5 miles into the trees, and 75 miles back; I was seriously pooped at the end of this day:

A pic of my hitch:

Some other pics once I was out of the woods onto the tundra and on a trail and the Kuskokwim River:

The above two shots were in a no-snow year so I was cutting stumps along the river. A four poster sled here would really shine, IF you stayed on the river.
This one is about 30 miles from my home and doesn't show the two hours I took getting the thing unstuck from deep snow. When you do get stuck, you have to roll your logs off, dig out the sled, then one-by-one carry the logs to hard snow before reloading the entire load. This was a nice, very hard, dense tree that burned well. It was really cold that day too, around -32*F when I left the house that morning.

It can be done, but you really need to look.

I had spent the previous two days scouting around, and found a cluster of several trees, but only one I could get to. This was along the Quiq.
4

I've had really good luck with this design, the box could be removed and longer runners used. Have had it about 3 years now with minimal repairs to the box. Have built quite a few sleds over the years, this is the best so far, I went with 6x8's for runners as I have slough or river banks and a 6-8 foot high set a railroad tracks to go over, and then slam down on top of, followed by a nice sharp 90 degree turn.....Am gonna post my pics before I loose the contents of my reply AGAIN!!! 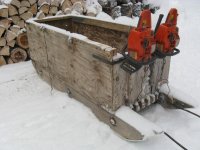 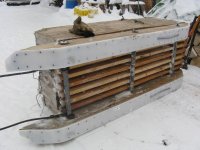 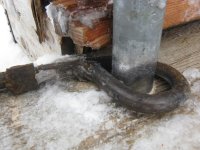 If I use lighter runners they either split and fold or just split. In my experience the most likely part to fail is either end of the tongue. Tubular or square stock, when it bends is next to impossible to bend back, so this time I used 5/8 solid round stock, it can be straightened good eough with a sledge and a stump if and when it bends, no biggie......The main " bulletproof" feature is the hardware, I will do my best to describe it......2 inch pipe as a spreader to the inside of the runners, with 1 inch pipe going through to the outside of the runners, all sandwiched together with washers and heavy allthread. Time has run out AGAIN!!! So will follow with images in the next [email protected][email protected]$##@#$......
4 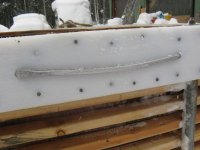 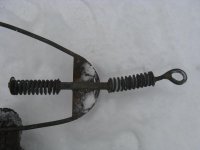 If it were just for firewood, I use a large otter sled. I attach the hitch up front reinforcing it with 3/4" plywood on the inside. Under the edges are 2x2's fastened with 3/8" eyebolts every 18". I then have a rope that goes through all the eyes with extra up front. I buck everything in the field and tie the ropes across the top. View attachment 92295 View attachment 92296 I have hauled a lot of wood with it. Then again our snow gets a little deeper than most areas.
A

I have ripped poly 55 gallon drums on a table saw on the radius to use for the bottom of runners.
Works and holds up well. And the price is right.

This is a cool thread. I agonized over this same question this year, ultimately I went with the old tried and true culvert sled. In the end it was all about price and simplicity for be. And to be honest, I like how a culvert sled tracks when going down a trail. The only downside of this type of sled design is all the banging on a bumpy wind-blown section of trail. I can fit 4 55gal drums in this sled and 8ft lumber stacks neatly inside. I can stack sheets of plywood on top if I want.

I don't bother with anything on the bottom of the plastic.
The reason your hitch is bending is it is extended when the front of the sled slams down off a bump. If you look at my hitch, there is not overhang. As-soon-as there is some slack, the shock pulls the bar back into the pipe. It has about 10,000 miles on it so far.
4

Nitroman said:
I don't bother with anything on the bottom of the plastic.
The reason your hitch is bending is it is extended when the front of the sled slams down off a bump. If you look at my hitch, there is not overhang. As-soon-as there is some slack, the shock pulls the bar back into the pipe. It has about 10,000 miles on it so far.
Click to expand...

Ya, I didn't run skags at first either, with 6 inch wide runners on hard pack, it is unsafe without them.....It handled like an innertube or car hood.....Glancing off trees on corners, wanting to slide downhill on a traverse at 90 degrees.....Which I could deal with.... until 800 lBS of sled tried to pass me on a slight incline coming down my driveway.....jacknifed, and flipped me off my sled and bent my tongue.....At that point I thought it was a pretty good idea to ad them......Is really easy to make and install, just drill two holes, and pound in a staple shaped piece of 5/8 bar in....You might consider trying a pair....am sure you'd like them....Much safer.....
No, my hitch does fine coming down hills and bumps......It gets bent occasionally when backing up and jacknifing in tight areas.....Usually straightens itself out with a good jerk.....Not a problem.....
Wow! ten thousand miles, impressive.....I believe it....Say, I was wondering, if you spend three days to find just one tree, wouldn't it be more cost effective to just buy some stove oil?
N