24 years ago my wife stood w/ my baby boy on her hip and asked me to sell my M-4. No snide comments about a Maule, I loved it. We talked about raising a family, time, money, fears, and she asked me to sell the plane. When the kids got older, she said we could do it all again some day.
That day happened last week. My buddy ran down to ANC to do the pre-buy after the first buyer fell through. He called me through the process and after he flew it he suggested it might be silly to walk away from this one. Thursday I was at FAI Int'l when I watched a pretty C170B turn final for the ski strip, and for the first time I laid eyes on my new plane. Wow!
When my buddy and I first decided to do the pre-buy, he likened it to being a kid, and getting the bat on the ball for the first time, then realizing you had to start running. All the while saying, "oh crap" "oh crap" "oh crap". Through the journey, we "ran the bases", all the while saying over and over, "oh crap". After the buy, as he drove home, we talked and he said, "what base are you on"? I said, "just turned third, headed home, and I'm still saying oh crap, oh crap".
I decided during cancer treatment 2 years ago I was going to fly again and I've been looking at planes ever since. This one came about at the right time, I was given an opportunity, I reached for it, and it happened. Talk about fast though. Whew!
I have a few things to do to get ready; medical, registration, insurance, etc. I want to install good intercom and a few other minor things. With any luck I'll be in the air inside of 2 weeks.
The look on my "kids" (20 and 24) was priceless when I surprised them with the plane. They kind of knew I was looking, but figured it was another of dad's crazy dreams. When I took my buddy out to have him help me move "somebody's" plane, the look on his face when he read the note I left was just crazy.
I've got a lot of work to do to be comfortable again. I do not take lightly that I've been out of the game for so long. I have not been in a hurry to date, I do not intend in getting in a hurry now and cutting any corners. I've got all summer to build time, have fun, and re-learn the basics once again. And I get to watch my son, and maybe my daughter, learn to fly too.
ARR
M

Inspiring stuff. Mine is almost 1 y.o. and a lot of my stuff is moving on to others.
T

Hope the medical and maintenance go well. Pretty exciting...there's no better way to see the world than from a small plane...
B

Years back my wife was not excited to go flying and only flew a few times. When she came out to the airport to see the plane, she loved it. Right away she has a sense of security about it. I think that has a lot to do with where we are in life right now.
There are a lot of places I want to see again, a lot of things I want to do. I guess I better go work on my honey do list or I'll never hear the end of that.
ARR

PHOTOS.... We need photos
A

Ok, I'll see if I can make that happen. The electronic end of things sometimes is difficult for me. Kind of nice, she is parked on "170 Row". There are several nice C170B/180hp parked near by, one a buddy of mine. Mine is not a 180hp, it has the 0-320 160hp w/ constant speed. Panel was upgraded years ago to vacuum. Radio is a KX 145. Has a t-ponder.
First upgrade will be a hard wired intercom. I am not fooling w/a bag of wires, batteries, etc. Also, and maybe this seems little, she needs door latches to hold the doors open. The wind caught the door the other night and the door hit the strut. I'm already done with that. I'll be looking for a dash mounted Garmin to add fairly soon. Then I'll be looking at mounting ski attach points. A friend has his plane torn down and told me that I "will" use his skis. She is on 8.50, and that is good for me for a while as I have no intent of going off strip for a while. My Maule had the same, and we did ok in a variety of areas. In time, as I get better, maybe I'll look at big tires.
So a few things to do, but all in all, she is ready to go, and so am I.
ARR

Ak River Rat said:
I decided during cancer treatment 2 years ago I was going to fly again and I've been looking at planes ever since.
Click to expand...

VERY happy that you are still with us, and that soon you will once again be doing what you love...!!! :topjob:
A

I really don't have much for photos. Here are a couple. 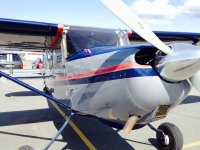 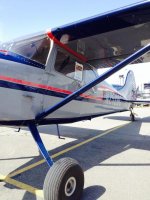