Kenai goes to bait at midnight.

Thaw out the sardines, boys... it's hammer time!

"I found...the fish fought much more fiercely, perhaps because of the four-inch spoon slapping them in the head throughout the battle." — from a Fish Alaska article...

Better get used to it.

With the "new and improved" BEG's adopted last year, bait is sure to come earlier and more frequently than it ever did in the past.

Pretty amazing that 7 years ago, we used to shoot for 9000 as a minimum escapement on the early run. Now it's the benchmark for a "great" run... with anything beyond 9000 considered "over-escapement".

That's progress.... or at least that's what they tell me

[FONT=Tahoma,verdana,arial,helv] Looks like that bait opener was perfectly timed. Forty inches of Kenai viz went to pieces overnight due to the Killey puking pure mud. If this is the typical mid-June dump, she'll need 4-7 days to clear.

I fished thru one of those dumps 5 years ago without the benefit of bait. Over four days of fishing, it took my boat 39 rod-hrs per fish landed. Funny how there was no argument amongst the crew about whether or not the fish would be released.
[/FONT]

And why does the Killey dump "pure mud"? Is that normal? Is it glacial mud?

And why does the Killey dump "pure mud"? Is that normal? Is it glacial mud?
Click to expand...

I'd say on that particular year, the fishing was so tough that after hours and hours of fruitless backtrolling, the first fish to the net was destined for a generous application of "wood shampoo" out of sheer frustration and carnal instinct. There were plenty of fish in the river but no more than a handful of boats below Riverbend, and most of those got blanked out. We boated three kings in four days of hard fishing. Because of the "no bait" regs in effect at the time, catches did not pick up until the water cleared the following week. FYI 2001 was slightly above average for run size at 16.7K, but well above average for escapement at 11.1K. There was no conservation concern at the time, but the run was managed for an escapement of 7.2K - 14.4K... no bait allowed until they could confidently project that the escapement would exceed 14.4K. My, have things changed.

The Killey is notorious for its muddy flows. There is a lot of unstable sediment in that drainage, and the spring run-off or a hard rain will send lots of it downriver into the Kenai. On another note, here's the latest report I got:

[FONT=Tahoma,verdana,arial,helv] Sounds like my brother of FishAlaska fame hit the water conditions just right for his stopover from the North Slope.

[/FONT][FONT=Tahoma,verdana,arial,helv]Hit it with a couple friends the two days before bait. Only fished 2 hrs on Thurs and killed a gorgeous 39# hen that was 2 inches below the slot. Caught it on a K16 Fickle Pickle au naturale.[/FONT]

Fished 3 hours Fri and released a brand new 47" slot hen caught on the same FP Kwik. That plug's a swimmer for sure! To think he almost lost it letting someone else man the tiller yesterday. WHEW![/FONT]
Last edited: Jun 11, 2006

Here's a pic of the big slot hen and the lucky Kwik. 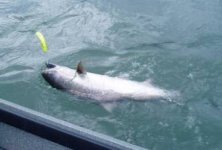 Doc,
On that last image of the hen, it appears there is a distance between the Kwikfish and the hook. Is that a trailer hook? I mean do you have a small leader, or just a long hook, or what?
M


wildog said:
Doc,
On that last image of the hen, it appears there is a distance between the Kwikfish and the hook. Is that a trailer hook? I mean do you have a small leader, or just a long hook, or what?
Click to expand...

That particular K16 is rigged from the tail screw-eye with a split ring to a barrel swivel to a 7/0 Gamakatsu Siwash. The whole works stretches back about three inches behind the butt of the plug! All I can say is it's pretty good insurance against the leader getting chewed through.

My preference for the swiveled siwash rig is to omit the split ring and mounting the swivel directly to the screw-eye ( must pry the screw-eye open to do this). On the K16-X Kwiks, there is no screw-eye, just a closed loop, so it can't be pried open. A split ring is required to mount the hook. With a siwash, I use two split rings. With a Gamakatsu 510, I rig with a split-ring to a swivel to the 510.

The run continues to come in strong. Projected in-river return stands at 17.2K, and thru June 13 only about 1000 fish harvested. That means they need to kill 7000 more (that's over 400 per day) in the next 17 days before they fish into the BEG.

What a quandry for ADFG... looks like there is no way to avoid "over-escaping" the river this year.

[FONT=Tahoma,verdana,arial,helv] The early run is really on a roll now!

Lots of fish the past week and a half... counts well above historic average for the last 9 days. If the numbers are real, the run-size projection now stands at nearly 22K.

Escapement is sure to exceed the upper end of BEG by at least 50%... unless of course ADFG ..[allows].. EO's in the Kasilof District.