I "toughen up" my fox by using the "flexible fabric glue" and glueing on some tougher felt. The glue is very flexible and the felt allows for a better, stronger stitch.
B

Sorry for the late reply...Didn't see it until today.

I used tanned elk leather for the palms of the mitts. I would have prefered to use some home tanned moose leather but I wasn't thinking that far ahead the last time I caught a moose.

Are you refering to using caribou with the hair still on for the backs and cuffs? If so I think it would be warm, but caribou seems to shed alot too. I've never had anything made with caribou before but maybe someone else can chime in on that. I have seen some very nice mitts made of Bear fur and think that they looked really nice and really warm.
W

Alaskan22 said:
I "toughen up" my fox by using the "flexible fabric glue" and glueing on some tougher felt. The glue is very flexible and the felt allows for a better, stronger stitch.
Click to expand...


Now just where did you learn that?
W

Wolfwoman said:
Anyone make things from fur?
Click to expand...

Hello, I new to the site but not new to making fur, 30 years I sold fur all over the world, Wolfwoman I like your hats, As most people that try to make fur,Do not become good at it, I some time stuff the web on Sunday just to read but not sign to post But most thing in life I fine explain, Why we do what we do, Now my story, how I got in to the fur as one of the best in Minnesota and the USA,

I was born in WA state and move to Minnesota when I was younger, I was a out door guy all the way as I was in to wildlife Photographing, I was out photographing and I run in to a old guy that was checking his traps, I had see he was all dress in fur, and ask him were he got it, He reply I made what you see, well time past by could not stop think of that old man, I was hoping to see him again a year when by and I run in to him, we stared to talk as he walk from one trap to another, and I was not attention to were I was, I said by to him as he turn a stated on this way, I just stood there think how I was going to get back, As he get to the top of the hill he stop turn and say your loss, I reply Yes, He said come on then I live not to far from here as it getting dark and a snow storm coming in. We walk about a hour and we come to a old cabin way back in the woods, He put his traps up and make a fire as he skin his fur we talk and eat not to think of the storm that was coming in, but I was so in to this old guy work it was so amazon, I wake up to the Sun shining and the old guy said What a storm we had last night, We got 20" of new snow a that he was not going to check his traps, As I say in the cabin for two day, I when home to think nothing but this, So I would go a see the old guy that I would call him Trapper, We became friend and he show me how to make fur, That was 30 year ago and now I a old man,

But you now are thinking why I telling you this, I have no clue, or why I posting here, Thou, I miss that old guy. All these year and I never thou to ask his name, I think he was the best furor in Minnesota, But as I spent a lot of time with him I new he was not from Minnesota But from a Alaska He told me once that he had lean this from a old woman in Alaska, It would be nice to know the History on this old guy, I to know I have to past this down As the old guy told me one day, I away new I was going to teach you this from the first day we talk, and you will know when that day come and the right person will come along, As to become a good furor it take time as I think back to what the old guy told me give it time, As then you maybe the best, then to said the best is with not one stitch missing, all end cut and clean up and it will last forever if the holder take care of it, As we all know that all good furors have there secret as in what work and what dose not, patter, But then again I still have no clue why I am tell you all this, But I sure in time I will get the answer, When I finger how to post a photo or two I well show you This old guys work throw my eyes and my hand, Sorry to keep going on but I had too, As I am not the greatest speller, I will have to post the story how I first meet the Fastest woman beaver skinner in Minnesota,,,, Again nice job on your hat,
W

Thank you, I am honored to have read that wonderful tale! I enjoy stories such as these and that is probably why you needed to tell me.

And thank you for the compliment on my hats!

I look forward to more stories from you
W

You are so welcome, As year have past The trapper show me so much as I lean one thing at a time down to the last stitch, To a masker piece never to have too a like,

This is one of my hats, It a Mountie man hat It a one hide head to the tail with all for feet, Lynn, I made some cool looking fur hats in my time and I still do to this day work 6 days a week, Thou the old man said at time to time If you work really hard you will lean to be the best that you can be, That your goal,

Your picture isn't showing, you can email it to me at [email protected] if you'd like?

And yes, it's best to do one thing and do it well!
W

Sorry, I thing I had the setting, wrong, Now you can see photo?

I thou I should add,
Canada Lynn,Fur Mountain Man, Hat, One hide, All for feet, and tail, Their are some claws in the feet , It as a lining in it as well it one size fit all, adjust with a drawstring, As max head size 24" 1/2 , can be custom to size, Head, Head are reform and refocus, ears up with glass eyes,Sewing, by hand and mechanic Cost 450.00 + shipping All price is subset to incest Do to fur prices,,, call or PM me
We take prided in are work, :topjob:
W

No still can't see it!

Well, spending a few days on the ferry gave me the time to get started. Made my first two hats! Was only going to be one, but the husband got jealous and wanted one too. 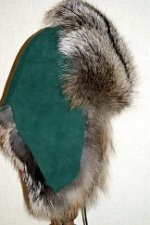 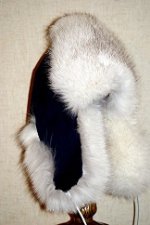 Christmas present for my mom.

So the Oldest Daughter Tin tanned, cut, sewed and wore her own caribou Parka at Kotzebue's 4th of July "Miss Arctic Teen" and took second

Nice coat and grats on the award! BUT she is wearing different colored socks. This makes OCD folks a bit nervous.

My first ever fur sewn anything! An Alaskan beaver trapper fur hat for my darling. I know there are some amazing fur sewers here (I aspire to be you), but I am pretty proud of my first attempt. I have never sewn fur before, so this was an entirely new experience. This hat was handsewn with recycled materials. I live in the bush so fabric isn't exactly readily available. I used an old coat for inside liner, a pair of black jeans for the outside fabric, and a beaver that my hunny trapped last year. (The tie strings are made from shoe laces). It was hand-sewn in two days (a total of twelve hours and my hands were terribly sore), but I worked hard to finish it to give to my hunny as a surprise when he got home from a hunting trip. I had taken his measurements earlier and I didn't have a pattern to work with. I based it off of an older hat I have in the same style. He wanted the "flaps" a little longer than usual for his entire chin to be covered, so I added an inch to each side. All in all it was a fun project and I'm impressed with the end result (although I have shortened the tie strings a bit). Total it cost only the price of tanning the beaver (around $35.00). Here's some pictures (any kindly worded critiqueing is welcome).

I have several beaver waiting to be turned into mittens ... I just can't decide on the palm/thumb material. I have some 4 oz brown cowhide or some 3 oz deerskin. I like the deerskin because it's soft, but I'm worried about durability. I uses the cowhide for hats which worked but don't really think it's right for mittens .

Reverse the Beaver, its tough, the hide can handle ampening from the hand and not shed, and I see my wife do that.

I am new to sewing fur and have been teaching myself over the past couple years. I started off sewing beaver hats. I have tried to make mukluks (not the greatest) and used canvas to teach myself. Also made slippers that ended up being a Christmas present (turned out that good) and 3 hats for Christmas presents. I am working on a lynx hat right now. I wish I could afford a Bonis fur sewing machine.

I hope one day to be as good as those who have inspired me! Skin sewing is certainly a skill I am trying to acquire!

Here are my first mittens: 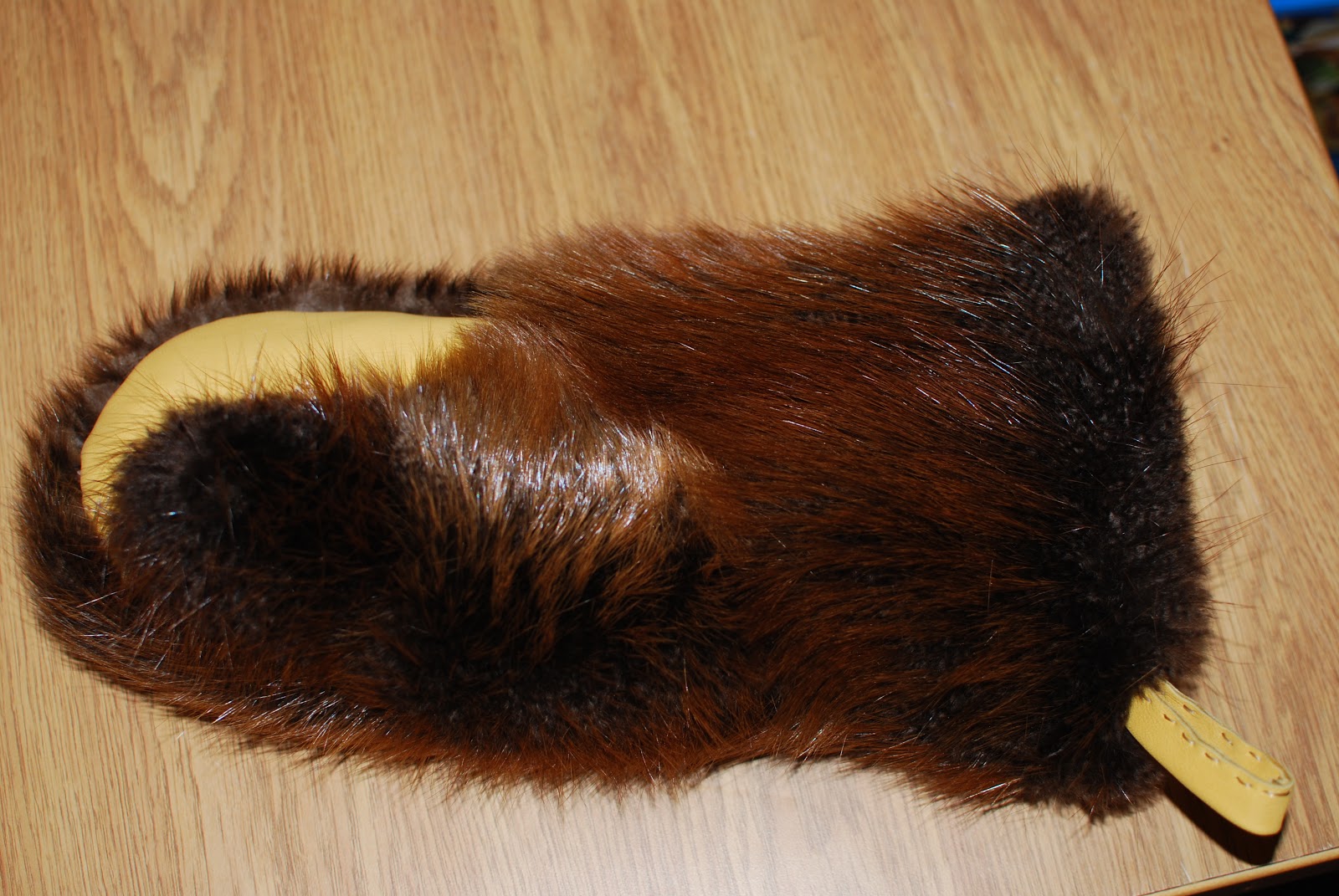 Baby mittens and my mittens: 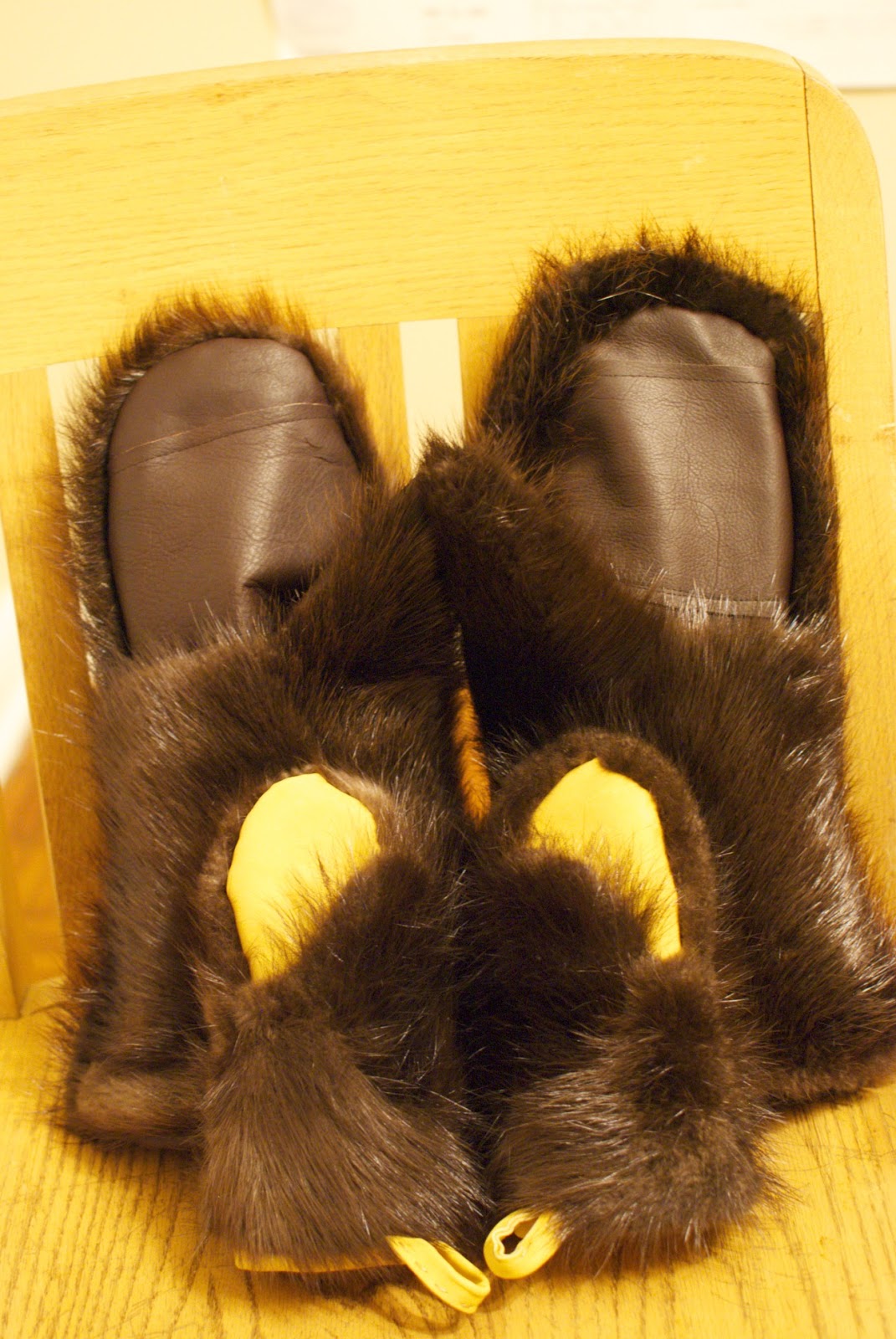 Fox hat (for a toddler): 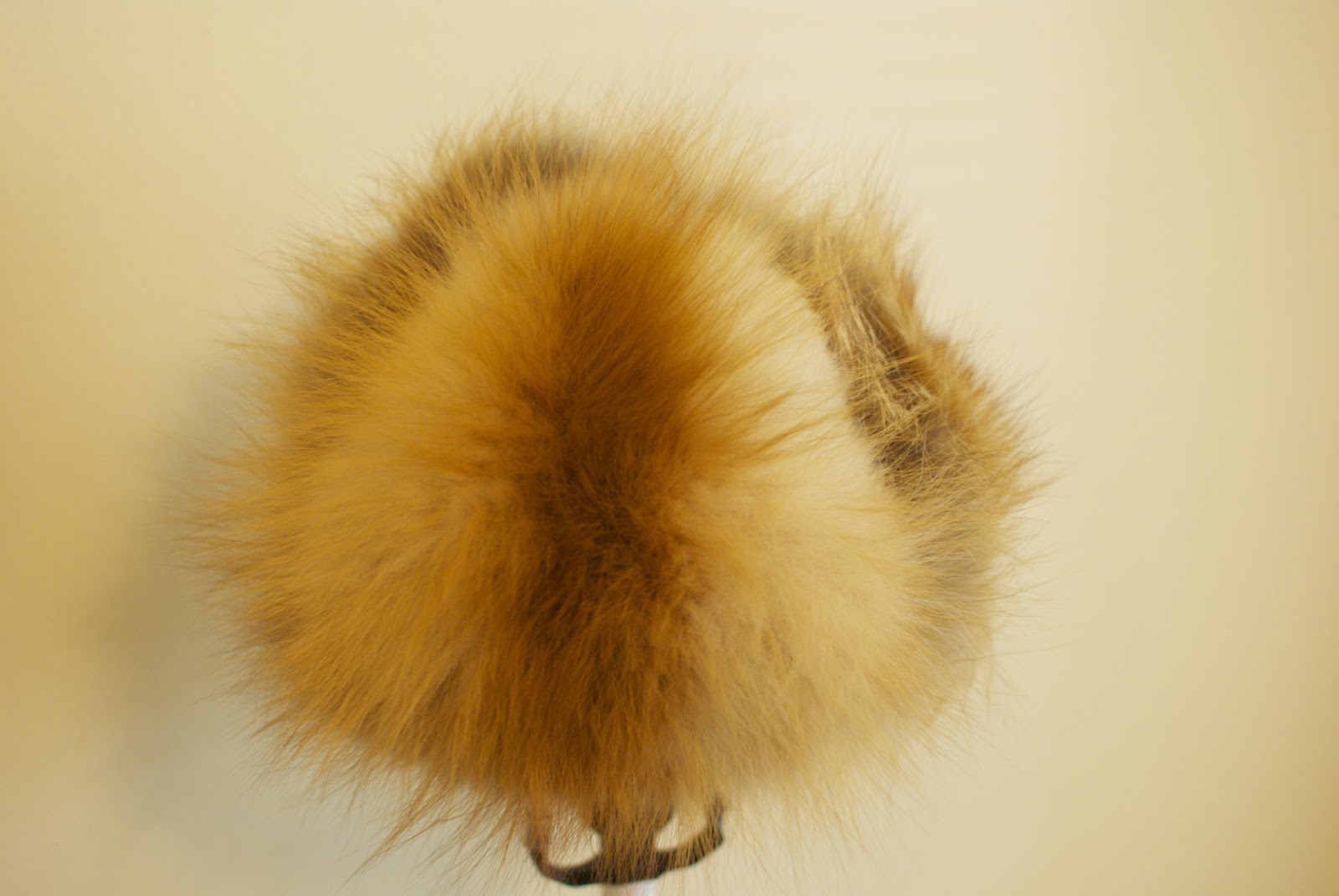 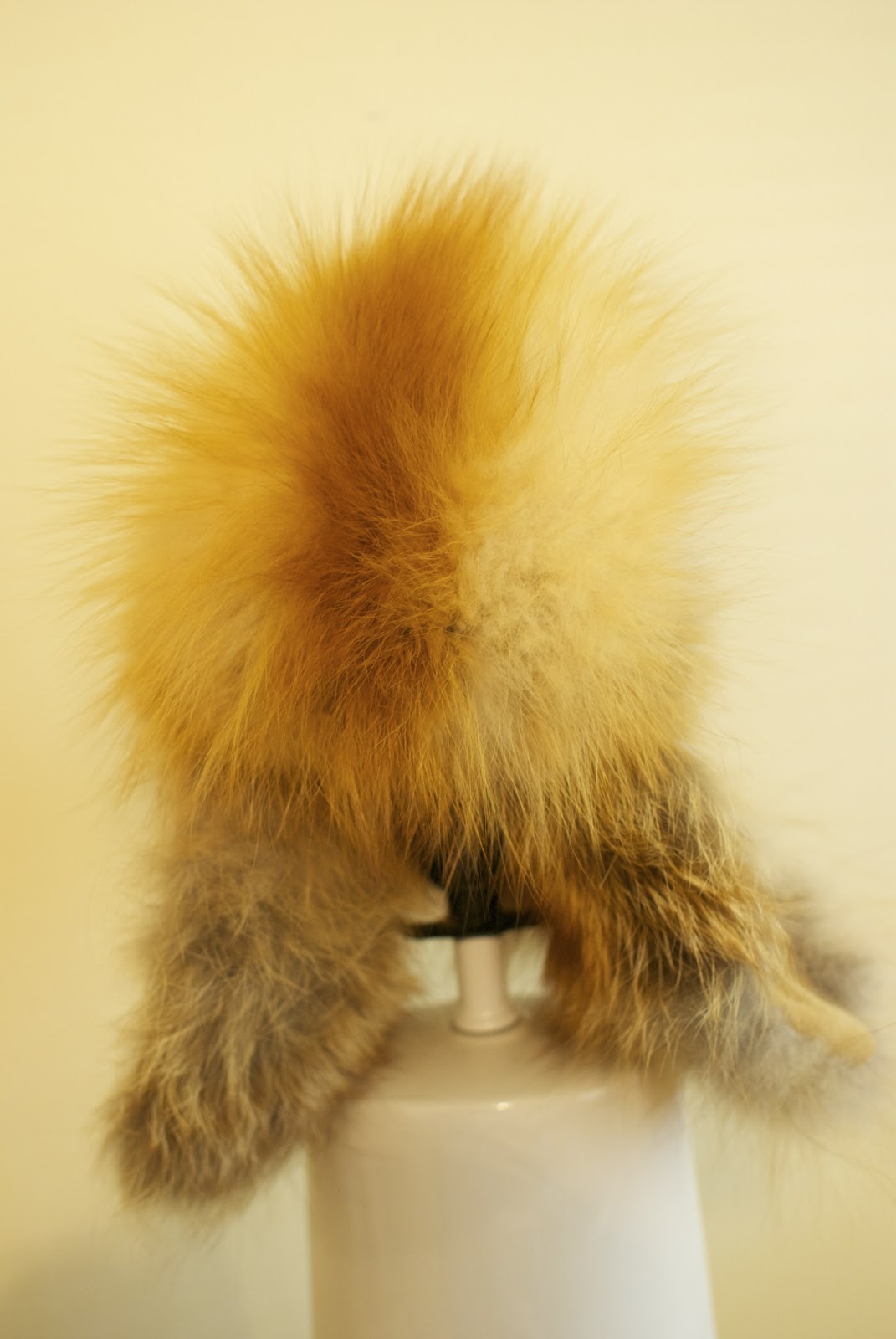 Got around to using one of my lynx furs... 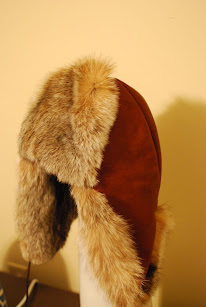 FlyLow said:
Got around to using one of my lynx furs...