Thanks, Rich! We managed to nab a few chickens with the bows to keep things interesting. If you saw a yellow teepee somewhere that looked like it was about to blow away, that was ours. That weather was just heinous, but it just makes the first bite taste that much better. Congrats on yer bull, too! Antlers don't taste that good anyway....

Congrats on a great hunt Rich! What did your fiancee think about the trip? Not sure how I missed this post of yours?

Wyo2AK said:
Got back from a successful weekend trip, harvesting a yearling bull. I had harbored hopes of hunting for a big bull in this country, but schedule conflicts didn’t leave me with a lot of time to work with. On top of which, more than anything I wanted to have a safe, fun hunt with my fiancée along. She has a growing interest in hunting, but had not yet been involved with a big game kill, so I really hoped for the opportunity to harvest a caribou for meat with her along for the whole process (hunt, stalk, kill, field dressing, packing out, etc.). We were both pretty excited about this hunt.

Anyway, quick and to the point…
We went in a well-known trail Friday night. Hiked up and over a big nasty mountain Saturday morning. Slow going. Not sure I’d go that route again, but it worked out for us. Sweet view from on top, too. Had awesome weather all day – great day for glassing. Hunted down the back side of the mountain. Spotted a cow with a calf lying on the snow in a basin below us couple hours later. Passed on them. Watched a black bear on a distant ridge for a while. Saw a few goats as well.

Continued down the ridge and spotted a lone caribou (thought it was a cow w/out calf at the time) lying on another patch of snow roughly 600 yards straight down. Couldn’t pass on this opportunity to put meat in the freezer knowing we had good weather, a decent pack out, and a full day to get it back to the truck. Went solo for the stalk, as it involved some sketchy terrain. The stalk took around 1.5 hours and covered a half mile (mostly dropping off the mountain, during which time the bull got up and ran ¼ mile down the drainage to feed in a meadow). Finally closed the gap. Stuffed my rain jacket in a cleft of rock for a steady rest and made a clean shot at ~275 yards. Was very pleased with the performance of the 168 g Barnes TTSX out of my 300 wm.

That’s right – he only has one antler. Just like the Grinch’s dog, Max.

Climbed back up most of the mountain to retrieve my pack. Broke down the caribou and cooled meat down on the rocks overnight. Camped nearby. Ate dinner. Slept well!

It poured rain Sunday for the pack out. Trail out was a grown-over jungle – we were sopping wet by the time we hit the highway ~4 miles later. Then just a 2-mile walk down the highway to get my truck. (Much better than the 14-mile hike out I had planned for next weekend!) Being a small bull, would have been a good one to bring out solo, but luckily I had help.

Good luck to everyone else still hunting.

injun joe good job on getting that cow! She looks nice and fat and actually has some cool antlers for a cow. Bet you keep your bow with you the next time around.
G

Well, I think the "sheep hunt for a caribou" statement holds 110% true!!! My buddy and I Got to the top of the ridge that I had scouted out about 6-7 hours after leaving the truck and started glassing. Nothing going from that vantage, so went over to check out the next bowl which took another hour. Started glassing there, and spotted about 13 bou down in the bottom of that bowl A LONG WAYS AWAY! Looked like there was a nice bull down there, so we decided to go after him. I was telling my buddy the whole time "what about the pack out if we get that monster? Its gonna be heinous!" He said, "if you have a chance to kill that thing and don't take it, then im going to tell everyone, including your children." "Well, I don't have any children yet, but I wouldn't want anyone to know that i passed on a big bull to shoot a smaller animal for the pack out!!! DAMMIT!" i replied.... So on with the stalk.

Took 45 min to an hour to hike our adrenaline filled *****E$ to a spot where we could begin decending into the bowl, by that time the bou had moved towards a watering hole a little closer to where we planned on entering the bowl. We didn't reall have any places to enter that had good coverage, so we just went straight towards the bottom on a 45 degree slope so that we could get some coverage for the stalk. Got to a nice shelf that had a small ridge running in between the bou and us, which was perfect. Hiked down to a spot where we thought we could get a good shot and poked our heads over the small ridge. They were standing there unknowing of our location or that we were even there. I threw my buddy the range finder and told him to get me a good range while i set my pack up as a lay down rest. He whisper yelled "285 yards", so then it was game time. I got the big boy in my scope on 9 power and squeezed it off, heard the thud and saw what i call "the death cringe" but the thing kept walking like nothing had happened, "shoot again" my buddy whisper yelled... So jacked another one in a squeezed it off, this time hit him in the backbone above the shoulder and he went down like a sack of rocks. We were stoked!!! 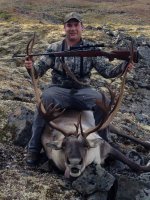 Some more pics... Dont know how to add the pictures within the text.. 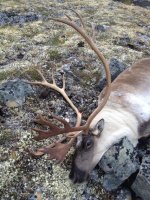 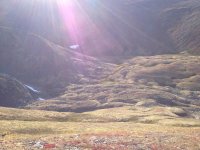 Looking into the bowl.. There are a few bou visible in this pic. Its like wheres waldo...
M

Way to go! So was the hike out worth it? Some encouragment is always a good thing expecially if your hunting buddy is up for the pack out. How far of a hike?

Never had a want to hunt caribou, but this hunt has had me stoked since last year when i read about it, you guys are killing me.
G

My buddy and i got all the meat, rack, and gear up to a ridge where we could get back to the road, but it was nearing dusk on sunday. We lightened our packs to just the necessities and covered all the meat and gear with a tarp weighted down with rocks... hiked out the original way we had came in, which was approximately 6 miles or so. Went down below and scouted out the ridge where the meat was and it looked like an easier way down. Came back the next morn with some reinforcements and got everything down in 6 hours. This hunt beat us up pretty good, but now that its all said and done, im ecstatic! Good times!

Way to go gpaul99! That is a great looking caribou and beautiful scenery you got him in!

Fantastic! I'm loving reading about the success people are finding on this hunt this year. It's usually a really low-odds hunt, but I think that's primarily because people don't hunt it like sheep - hard hiking, lots of climbing, and lots of miles covered.

I was in your exact position on my first Kenai Mts caribou, but I didn't think about the pack out until after I pulled the trigger. I was alone 7 miles in, and like you, I took the only large bull out of a group of about 20 smaller bulls and cows. I was pretty excited until it hit the ground. As soon as it fell, though, I had a serious "oh crap" moment, but again, like you I was pretty darn ecstatic after all was said and done and was ready to do it again.

Yes!! Nice work, indeed. Don't think about the pack out. It always sucks. Just go for it. I, too, am stoked to hear about people getting after it on this hunt. Way better than driving two days and whacking one while hiding in the ditch next to the road....