The wife and I own a 28' Bayliner, which we keep in transient moorage in Whittier. We had no experience when we bought our boat five seasons ago, but over the past few years we have gained enough knowledge that I would categorize us "moderately naive" rather than "extremely ignorant" when it comes to seamanship.

Often, we head south out of Whittier to Port Nellie Juan or Dangerous Passage. Because of our inexperience, we have always played it safe by taking the long route around Culross Island instead of shortcutting through Culross Passage. The description of Culross Passage in the Lethcoes' guide indicates that local knowledge is required and advises stationing someone on the bow to keep an eye out for rocks. That was a little too much for my comfort level, so we simply took the long route.

Considering that we now have five summers of boating under our belts (and that the price of gas will be astronomical this summer), we are contemplating shortcutting through Culross Passage on our way south this summer. Since we have never cut through Culross Passage, I'm hoping those who have will be willing to provide their input and advice. Should I only cut through at high slack tide? Any tips for avoiding submerged rocks?

Any feedback would be appreciated.

I don't really think it is a short cut. It often takes a lot longer heading through the passage. Too many distractions!:lol: I will just assume that you have a plotter with the appropriate data for PWS. As you enter the northern side of the passage it will neck down and you will see a couple of islands. I go through the right hand (west) opening. You can also go through the far east side, but it should be done with caution. It really is an easy area to navigate and can get a bit exciting going through the narrow spots on a busy day. Watch your sounder and plotter and stay away from the "*" on the plotter. It is a cool area to explore.

When heading south through the passage remember right, left, right as you come to the islands. Go slow your first few times until you get a course marked on your gps. I always use this route with my own boat and have been through there on the way to main bay on tenders during my fishing years. Until you ar comfortable, have a spotter. Most likely you will not be alone for very long in the passage and have the option of following a passing vessel. At low tide there are several rocks showing that disappear with the rising water. Study your map and gps you should be ok.

I don't claim to be an expert, and maybe I've been more lucky than good, but Culross is far from the trickiest shallowest areas I've been in, in the sound. I even ran through Cullross on my maiden voyage. I don't recall keeping paticular track of the tide stage, and know I've ran through in various stages of the tide. One thing to note on the Lethcoes is they did their cruising in a sailboat, so much deeper draft than the vast majority of power boats. I know you're not supposed to navigate from their notes, but they've been spot on in every area I've visited when I've used their notes.

The Northern most narrows are the trickiest area, and if you follow their comments and take care your first few times through you should have no problems. Watch your chart and sonar as well. If you're not paying attention when headed northbound, you can end up on the other side of a shoal on the East when approaching the middle narrows, but it's well marked on the charts, just keep a mid channel course.

It's a fairly popular passage, in fact I don't think I've ever been through there when there aren't other boats around, and you'll likely see 1/2 dozen boats on your way through the passage. So following somebody else through wouldn't be a bad idea, well unless they were clueless
F

I used to take my 38 footer through the east side (left side going south) narrow passage but in the mid 80's a rock slid down and makes that a bit uncomfortable at low water. That, plus it's a blind bend that you might meet someone coming on the other side so I always use
the more traveled route on the other side. There's plenty deep water if you hug the right side until you get past the rocks showing at low water then stay mostly in the middle until you get to the south end where there's a reef coming off the mainland towards the last island that comes up to 12' or less so to be safe, I always swung towards the south end of the island. Piece of cake once you get the track down. Following another boat is a good way to go until you're comfortable.
T

Here's a post AK Nimrod made a few years ago. It helped me sort out the passage when I was in research mode.

I was nervous my first time through. Pretty much idled through all the areas where the crusing guide gave specific instructions on what to avoid. Now I zip right on through knowing where to go and what to avoid. No big deal. The trickiest part in my opinion is when you're traveling north and get to the north end. You want to take the passage to your left, and that can be really hard to see. Don't make the mistake and take one of the passages on your right. If you went through Culross Passage from north to south and then are coming back through south to north, if you look at the breadcrumb trail in your gps then you can see where to go. I don't know if Culross Passage is a shortcut, but if the water is rough where you would go around Culross Island then the passage is a good alternative. Plus I think it's just a neat place to run through.
A

Paul H said:
So following somebody else through wouldn't be a bad idea, well unless they were clueless
Click to expand...

The trick is to follow a bigger boat through. Even if they are clueless, you just need enough time to react and help them off the rocks....

Thanks for the good feedback, fellas. Much obliged.

It's surely not the trickiest, but as always anywhere can be dangerous if your not paying attention. Done it lots in small to big boats. One thing with my craft now I use the tide. Bucking the tide can cost ya plenty of fuel, would guess there between the islands on a strong tide day it pushes 8 to 10 knots. And yes watch low or very low tides.
A

alaskapiranha said:
It's surely not the trickiest, but as always anywhere can be dangerous if your not paying attention. Done it lots in small to big boats. One thing with my craft now I use the tide. Bucking the tide can cost ya plenty of fuel, would guess there between the islands on a strong tide day it pushes 8 to 10 knots. And yes watch low or very low tides.
Click to expand...


The tidal currents are not bad at all. Nowhere near 8 to 10 knots!
http://co-ops.nos.noaa.gov/currents04/tab2pc4.html
R

Going through Culross is about 1 mile longer than going through Perry Pass. The scenery is nicer in Culross.
M

I usually have my eyes glued to the plotter going about 20 knots through there, just following the path. I like to check my routes out before I go anywhere, almost memorize it if I can. I like to leave the track lines on the plotter and run over them again and again. It seems pretty safe compared to many other places you could get yourself into in PWS.

A little off topic - but, how do you read the charts at the tidal noaa link that akpowrider posted? I don't even see Culross in the link. What is the tidal speed ratio ?
A

Bullelkklr said:
A little off topic - but, how do you read the charts at the tidal noaa link that akpowrider posted? I don't even see Culross in the link. What is the tidal speed ratio ?
Click to expand...

If you click on the red question mark on the page, it gives a bit of a description of how to read the data and what it means.
M 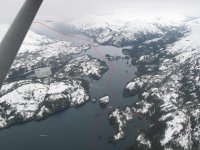 Forgot where I downloaded this picture from, but it is quite accurate depicting the safe route through. All the descriptions above of transiting this lovely passage are spot on.
P

This is a little late, I just found this site and reading the commentaries brought back some fond and some not so fond memories. Culross was an interesting run and could be pretty spooky at times, especially running through at night. Thinking back on some of it I guess I was a whole lot braver than I am now..or maybe I got smarter.

Been through Cullross pass many times and the only thing that I would add to whats been said already is, be sure you have a good GPS Chartplotter to back you up. A few seasons ago in early September, we headed out of Whitter on what was otherwise a perfect weather day. When we started down the pass at about 8:00 AM we encountered a marine layer. Even with the Simrad chartplotter after the first narrows on the west side I got turned around once where you break back to the east, had to slow way down and I also kept my eyes on the radar and beeped my horn occasionally.

We used to anchor up and spend the night in Culross....I was just a teenager then, but I'm not sure I'd do that now. It could be beautiful, though....

akpowrider said:
The tidal currents are not bad at all. Nowhere near 8 to 10 knots!

Not the whole passage but on a High to low tide day between the first islands it sure can run that fast, been out there since 1979 and a few times is fast. So I suggest you go there on a 15' high day and wait at the bottom of the pass and run thru before you call it as not.
Click to expand...