My buddy ran a black bear bait station last spring in Unit 7. He never hunted his stand because all he got were pictures of brown bears. Lots of pics. Some of them looked like pretty impressive bears. So when we found out that we would be able to hunt brown bears over bait this year, he was very disappointed because he moved out of state last fall! He told me where his site was so I could run it this spring for brown bears. He had trouble last year with brown bears ripping his barrel right off the chains. So this year we reinforced the barrel with steel pipe. I decided to move the site about 400 yards simply because I liked the lay of the land better. We got bait out pretty early - around April 18th. So it took a while before we got any hits. We were using expired bread products mixed with some Bait 'Em 907 products. Once they started coming in, we had to haul a lot of bait to keep them fed! Those brownie's can eat! We got a lot of good trail camera videos of at least 6 bears. Two or three would have been shooters. But there was one in particular that we had our eye on that we nick-named "scar butt" for obvious reasons. I was pretty sure he was the same boar we had noticed in the 2013 pictures.

We hauled in a lot of bait on our backs since our stand was 3/4 of a mile in without 4-wheeler access. Sometimes we would haul over 100 lbs each on our backs and 30-40 lbs in a sack in our arms. Hard work!

The first three trips out hunting, we never saw any bears. I would sit for 4 to 6 hours each time. Sometimes early in the morning. Sometimes in the evenings. I worked it in when I could since I was still working 40 hours per week in Anchorage. One evening, we could hear two bears huffing and making a wide circle. They came to within 50 yards of us but we never saw them. They sounded mad. At the time I couldn't tell if it was a sow with cubs that was mad at us or two bears that were mad at each other.

The fourth time in the stand, after sitting for about 3 hours, Scar Butt came in with a sow with a collar on. In 2013 we got a picture of a big boar mounting a sow with a collar. I'm sure it was the same two bears. They were making the same huffing noises as they came in and obviously weren't initially aware of our presence in the tree stands 20 yards away. After a few minutes of watching them, I got a perfect broad side shot at ol' Scar Butt. I put the arrow right behind his shoulder and it went all the way through. He didn't make it 50 yards before he expired. However, the sow that was with him stuck around for quite a while making a lot of noise. After about 30 minutes it sounded like she had left. He was easy to track. But not easy to haul out. He was exactly 9'0" from nose to tail and the same measurement claw to claw. The green skull measured 26 7/16" at fish and game.

Hauling him out was a lot of work. It wouldn't have happened without help from two good buddies. We got all the meat out and I was able to share it with some friends who were willing to try it. Actually, it's not half bad. Much better than expected. An edited video of the hunt is attached below. Enjoy!

Congrats on the bear! Hard work always pays off and I would say it payed off quite well for you. Again congratulations on harvesting such a specimen! I'm currently trying to stick one of those in another part of the state, hopefully tonight will be the night!
P

Awesome hunt Cody! Sure glad you aced it right in the boiler maker, so we didnt have to chase a wounded angry 9'er through the brush. Amazing what a well placed muzzy will do to a bear like that. Anyone know approximately what # he would be P&Y at 26 7/16"?
3

Outstanding, simply outstanding. And you even brought out the meat. Well deserved bear!
S

Great bear, story and video .Good job at finding a good spot and caming it like you did, takes a lot of patience sometimes. What did they age him at ? Thanks for the story, Ron.

Awesome hunt and video of it! Congrats on removing yet another moose eater (even tho he appears to like leftover bread too). I can't help but think a guy gets a bit unnerved when he has has to LOOK FOR a bear that he shot. You just never know.....

Awesome write up and even got it all on quality video! Just plain awesome! Envy you guys!
S

Wow. Way to put in the time and get it done. Man, some hogs taken on the kenai this year! Believe it or not, taking huge boars like that actually boosts the population as they kill cubs. Perfect shot. You must have practiced a bit. Brown bear meat tastes good? Now everyone will want one!
P

I'm still skeptical about the meat tasting good? However, when we cleaned it, it really didn't smell. In fact, I have smelled worse black bears. I'm thinking maybe his diet of bread and doughnuts absorbed everything?

Sollybug said:
Believe it or not, taking huge boars like that actually boosts the population as they kill cubs.
Click to expand...

Yes, boars kill cubs, but cubs aren't the normal diet like moose, and moose calves are. I would think a boar can kill far more moose than bear cubs in it's lifetime. At least it takes awhile for bear cubs to grow enough to be able to kill a moose. And hopefully enough moose calves will grow to maturity by then as well.

I told this story awhile back and even though at least one person didn't believe it I'll tell it again. Years ago a guide friend of mine was flying in to find his hunter a big brownie. It was early spring and they were to hunt on snowshoes. On the flight in they found where a large boar had killed 9 moose. The moose just couldn't escape in the deep snow. The bear would just eat a little and go kill another one. They are like a cat with a mouse....just can't help themselves. They hunted that boar but never got it. As they were closing the distance the hunter finally gave out.

Thanks ckreitel for killing another big Kenai moose muncher....!!! :topjob:
A

Awesome video and congratulations on a beautiful trophy with a bow!
C

Well, I never said the meat was GOOD. Just that it's not bad and was better than expected... Not exactly the same thing! Haha.

I didn't think to ask Fish and Game on the age and they didn't tell me. But they did pull a tooth...
P

Here are some pictures for you. 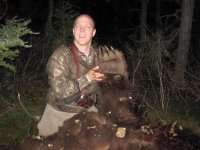 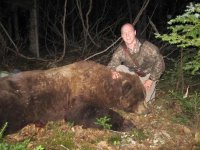 Awsome ! congrats on a monster-and with a bow at that...great video; what kind of camera did you use ?
P

What an opportunity! Congrats on the beautiful bruin! I am just trying everything I can to get them to find my bait site. Same basic place I have baited 5 years in the past, although I have moved it slightly because of increased pressure. Never had it go this long without getting hit....
S

Thanks for clarifying. I can assure you black bear can taste like veal and berry bears are prime. I've never tasted a brownie and sounds like that's not a bad thing.....

ckreitel said:
Well, I never said the meat was GOOD. Just that it's not bad and was better than expected...
Click to expand...


Sollybug said:
Thanks for clarifying. I can assure you black bear can taste like veal and berry bears are prime. I've never tasted a brownie and sounds like that's not a bad thing.....
Click to expand...

Hard to beat a berry bear for sure. I had to try brownie and tried a young sow brownie. Edible, but....(see above). I would imagine a "special" marinade to help cut the grease might help.


Sent from my iPhone using Tapatalk

ckreitel said:
Well, I never said the meat was GOOD. Just that it's not bad and was better than expected... Not exactly the same thing! Haha.

I didn't think to ask Fish and Game on the age and they didn't tell me. But they did pull a tooth...
Click to expand...

You should be able to call Fish and Game in a year from now and get the age on him. They do them in batches. It was a year for my black bear (6 year old), and a year for my Arctic Grizz (19 year old). It will be neat for you to revive this thread in a year with the age! Congrats and nice bear!