Dropped goat hunters off and trolled up 2 white kings, they both had pollock in their stomachs. Hunters couldnt get close enough to the goats, but one pf em found a bear skull.

kodiakcombo said:
Dropped goat hunters off and trolled up 2 white kings, they both had pollock in their stomachs. Hunters couldnt get close enough to the goats, but one pf em found a bear skull.
Click to expand...

Man those are some beaut's your catchin!!! i wish these kings up here would devolpe a taste for pollock!! there is no shortage of them that for sure!! love the pic's!! keep em comin!!
B

Just had white king for dinner, but it's been in the freezer a couple of months. Great, but fresh is even greater! :lol:

WOW, I have never seen a white king. The flesh looks like a cod. Is the color from what they eat? Are they local Kings or from the south?

Delta Tenderfoot said:
WOW, I have never seen a white king. The flesh looks like a cod. Is the color from what they eat? Are they local Kings or from the south?
Click to expand...

I have often wondered about the genetics of the white king as well. It is definitely on my bucket list of fish to catch. I found an informative article from ADFG on the subject: http://www.adfg.alaska.gov/index.cfm?adfg=wildlifenews.view_article&articles_id=244
B

I've never been completely satisfied with any of the explanations, because we catch fish that are half red and half white, as well as some that are virtually "calico" with red spots on a white background. I've never seen any scientific measures, but the whites have a rep for lots more sweet oils than the reds, making them the primo model for folks that eat lots of kings.

White king reminds me a lot of black cod, it's so oily. All I can say for sure is you really notice the difference from red when cooking. Lots more oil dripping out of the whites, enough to cause lots of flaming on barbecue grills and fire concerns in traditional smokehouses. I know several folks who've set their smokehouses on fire while smoking whites. We love our king salmon whether red or white, but don't feel right going into winter if we don't have a fair share of both in the freezer.

Here they are on deck 4 fillets ready for butchering.

You sure know how to make a guy's mouth water! Beautiful.:topjob:

Nice fish! I used to think the reds and whites were basically the same fish with different meat color. Now that I have caught a few more, I think they are quite different. I am almost to the point where I can say that's going to be white a king and be correct about 66% of the time. They seem like red kings that hit a wall too hard and got shortened for the same amount of mass. Not sure how best to describe it. Bigger shoulders? Like Brownbear said, they do seem oilier.

Cooked up a Shaker/little king last night that was white. Yummy!!!! 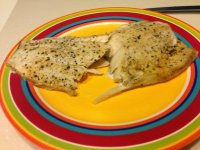 great, now Rudy is shaking them onto his plate instead of back into the water!!!

POLE BENDER said:
great, now Rudy is shaking them onto his plate instead of back into the water!!!
Click to expand...

Lol. Yah. It was a bleeder...and a **** good meal. This one was a bit odd. White and probably 4 pounds. Bigger than a shaker. Smaller than the typical 6 to 8 pounders we do begin to keep.

I did think to myself after I posted that "dammit, did I just admit to keeping those dinkers?!?" Haha. I'll be out sat or sun if the weather holds.